The Field Spaniel – From the Breeders Eye

Because of the integrity of the breeders, the Field Spaniel is still a breed that can function as it was intended.  The dogs that you see in the show ring are the same dogs that are proving their working ability in hunt tests today and should be bred and judged with that in mind.  The breed also excels at agility, rally, obedience, tracking and doing therapy work.  It is truly a case of form follows function.

The Field Spaniel is a substantial hunting companion and any reference to them as little brown dogs should be directed towards the Sussex Spaniel.  A dog with substance that is longer than they are tall; however, they should not be confused with their Sussex or English Springer Spaniel cousins in any aspect from attributes to presentation.   They have a slower methodical gait than some of the other sporting dogs and are dogs that you can picture working all day in the field.  The standard states they are “a combination of beauty and utility”.  This is of utmost importance in assessing breed type. 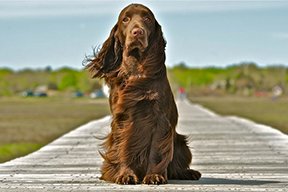 A breed of balance, there is no one part of the dog that is more important than another.  It is very important to see the Field Spaniel as a whole dog and not as parts and pieces that one may favor as a personal preference.  As breeders, we are working with a very limited gene pool and we can not throw the baby out with the bathwater over a single fault.  Doing so could limit our gene pool even further.  While some faults may weigh more heavily on a judges selection it should be noted that specifically and/or consistently judging any given part does a disservice to the breed.  Major structural faults which would be a detriment to the dog in the field should be penalized as such, however.  Forgiveness in allowing a breeder to improve their stocks fault while maintaining true type should be an important factor.  In general, Field Spaniel breeders will agree that breed type accompanied with a dog that can structurally stand up to the requirements of the field is what we are ideally breeding.  A good breeder and judge knows that type in a rare breed is a difficult loss to recover and may be a huge set back to a breed overall.

History proves that our breed almost became extinct by attempting to breed for what was winning in the show rings at the time.  It would be a grave mistake to do so again.  The breed is not one of extremes in any direction.  While the breed should always maintain the element of function, the piece of beauty they possess should be one of which is regal and pleasing to the eye.  This beauty should be maintained, but again, should not be an extreme.  The Field Spaniel should never fall into the category of the typical “all American show dog” and should never be rewarded “specifically” for presentation or qualities that make them such.  Any suggestion, when speaking of the breed that a dog may be a good or better group dog than another, even though it lacks breed type is truly a statement lacking understanding of the breed and how the breed should be viewed at the group level.  As breeders, we want our “group dogs” and our “breed dogs” to be one in the same.

Field Spaniels are a breed that is still primarily owner handled.  The attitude of a Field Spaniel should be that of a docile yet fun loving dog strongly devoted to their owners.  Naturally reserved at initial meetings; unsure puppies should be judged with this in mind.  However, older dogs that are showing evidence of being scared or timid should have this taken into consideration during judging, as the docile nature should not be accepted to the extreme.

Moderation overall is a key element in judging the breed and as breeders we should not be breeding toward any extremes. We, as breeders, have worked very hard to maintain the dual purpose of the breed and we ask that as you judge them, you keep this at the forefront of your selections.  We also ask that as you judge, you judge based upon the merits of the dog that is presented to you.