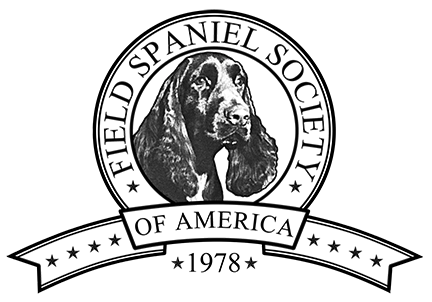 This award is to recognize and encourage Field Spaniels and their owners who are involved in service work.  This is an annual award that will be presented at the club's awards banquet.  The award will be a plaque or other suitable object upon which the name of the dog earning the award and the year shall be inscribed.  The award will be given to the owner of the dog.

This award was created through the generosity of Nancy Redmon, who is responsible for supplying the commemoratives.

*Mailing address for Submissions to the FSSA Corresponding Secretary is:

Material may be sent to the Corresponding Secretary via USPS or electronically.

PLEASE NOTE: We encourage re-submissions from those who have previously sent a nomination for a candidate that did not win. The Board receives nominations for many worthy candidates and sincerely regrets that only one can be selected to win this award each year.