Koda is a seven year old field spaniel who is registered as a therapy dog with Pet Partners and is an AKC Champion in Therapy Work. He is also a registered Reading Education Assistance Dog through Intermountain Therapy Animals.

Koda works at Sabin Elementary School where he visits weekly and listens to students read. From January to June of 2014, he worked with a first grade class, reading individually each week with five struggling students in half-hour sessions, including a student with autism and one with severe disabilities. In addition, he and his handler visited the class several extra days so that all the children in the class had a chance to read with him. From September to December 2014, Koda returned to the same first grade classroom and spent three ninety-minute sessions meeting all the students in the class in small groups. Beginning in October, he worked weekly in twenty-minute sessions with five at risk readers, including one student who is a selective mute and one with severe epilepsy. Koda spent 50 hours at Sabin in 2014 supporting readers.

Koda also reads with children once a month at North Portland Library. He visits with those who sign up to read for thirty-minute sessions or finds children in the library who are interested in reading to him. Koda reads with individuals, siblings and families. He contributed 20 hours to the library program in 2014. Koda has also been a friend and visitor to residents of White Shield Home for Girls in Portland. He visits the preschool program made up of children whose mothers are residents in the facility. Koda works with the toddlers and babies on trusting animals, developing gentle hands, and sharing. After his thirty-minute preschool visit, he and Robin go upstairs to the residence hall of girls ages thirteen to eighteen who have been placed by Child Protective Services. Here Koda does therapy work: comforting girls who need to snuggle, learning tricks to give them opportunities to learn control, and being there to take the place of animals they left behind. He also offers hugs and snuggles for the staff. Koda provided 18 hours of comfort in 12 bi-weekly visits during 2014.

Starting in June of 2014, Koda began visiting Athena House, a safe house for survivors of Child Sex Trafficking. He spends an hour offering comfort to the residents in many ways, based on their individual needs. He spends alot of time offering stress release to the staff at well. Koda made 10 bi-weekly visits to Athena for 12 hours of therapy.

Twice this year, Koda and Robin participated in a two hour “stress reducing” event for students at Reed College, offering relief from studying for midterms and finals. During 2014, Koda offered 104 hours of therapy in 61 visits. 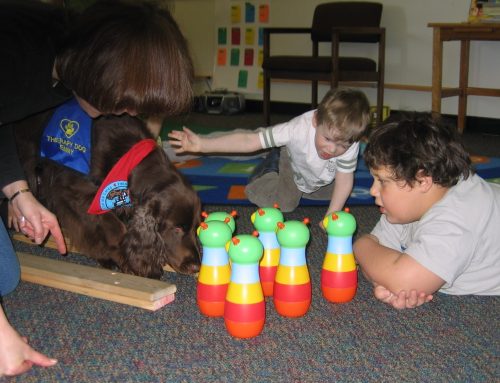