by Carole Kaye © 2007 All Rights Reserved 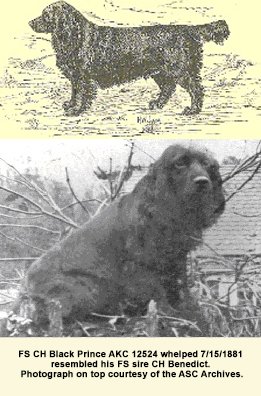 Field Spaniels were one of the first breeds to be shown and registered in America. Their show careers trace back to well before the AKC was founded in 1884, and even before the American Spaniel Club was founded in 1881. They have been recorded in some of our country’s earliest stud books. Black Field Spaniel Champion Benedict was an American Champion by 1883, before there even was an AKC! The first Field Spaniel registered in America was “Dash,” whelped in 1879, and imported by Mr. A. H. Moore. How did they originate?

Spaniels have been documented for many centuries, particularly in Europe and the UK. The breeds and categories of today have evolved from earlier distinctions. The smallest of the spaniels were known as ‘comforters’ and were the foundations of today’s “toy” varieties. The larger, working spaniels were classified as either “land” spaniels or as “water” spaniels. The land spaniels specialized in seeking and flushing small game including hare and game birds, at first being used with falcons or with the net, and later being used as gun dogs when the gun became utilized for hunting.

In the UK and the USA, the smaller of these land spaniels became known as “cocker spaniels” because of their unique specialty of working the woodcock birds. Larger flushing spaniels were commonly referred to as “field spaniels” or “springers” because of the way they would ‘spring’ or flush out the game. As dog shows emerged in the second half of the 19th century, there was an evolution of spaniel “breeds” as distinguished from one another by “Breed Standards” (written descriptons) that were established by the kennel clubs and expert writers of the day.

The Field Spaniel had developed into a distinct breed primarily out of a combination of larger black cocker spaniels (most notably those that date back to the early 1800’s from Mr. Footman’s kennels) that were interbred with other regional strains, particularly those larger and longer Sussex strains. It has been alleged that in FS early development, Irish Water Spaniels (giving the top knot and refined head), Norfolk or English Springer Spaniels, and even the Basset Hound (influencing color, short crooked legs, long body length and haw) were cross bred with these early Field Spaniels. At that time, Cockers and Field Spaniels were frequently interbred, and the resultant pups were exhibited in whichever classification they most resembled, usually a categorization done by weight and color. As the varieties of land spaniels became distinct breeds, the breed known as Field Spaniels were the larger springers (over 28 pounds) that were generally black, liver or roan in color.

When the dog show phenomenon took off in the late 1800’s and the various strains of spaniels became more carefully defined by the ‘breed standards,’ the whims and fancies of the breeders and the judges of the day greatly influenced the evolution of the spaniel family. With a few exceptions among breeders who still hunted over their dogs, spaniels were no longer being selectively bred primarily for their usefulness as working dogs in the field. They were instead being bred according to the fancy notions of what would win prizes in the dog shows. The handsome Field Spaniel became immensely popular.

By 1900 the “Field Spaniel” breed had passed its peak of popularity amongst the spaniel fanciers, both in the US and abroad. In the 1890’s, the breed had become excessively long and low because that was what was whimsically thought to be superior and was winning in the show rings. Then the press began to ridicule them for their extremes, causing them to be less desirable. The Field Spaniel was left with only a few dedicated breeders, and their numbers diminished significantly while other breeds (including the Cocker and the English Springer Spaniel) gained popularity. The remaining Field Spaniel breeders did what they could to reestablish the breed’s appearance, or “type”, to be higher up on leg and of a more moderate length, while preserving the very distinguishing head of the Field Spaniel. Even though they were successful in reestablishing the quality of the breed, their efforts unfortunately did not win back the popularity for the breed partly because other breeds had by then captured the public’s fancy, and because of the advent of the World Wars.

Throughout the 1900’s, the Field Spaniel had some ups and downs, but these were mostly downs until a rally began in the late 1960’s. Luckily there were a few dedicated breeders in England that had saved the breed from extinction. In America, registrations of the breed had slowed enormously through the teens and only a few were registered from the late 1920’s thru 1941. There weren’t any in the AKC studbooks from 1942 until Dick Squier and Carl Tuttle brought in their imports in 1967 and started the revival of the breed in America. They can be seen in the photo below taken at the ASC Flushing Show in 1968. 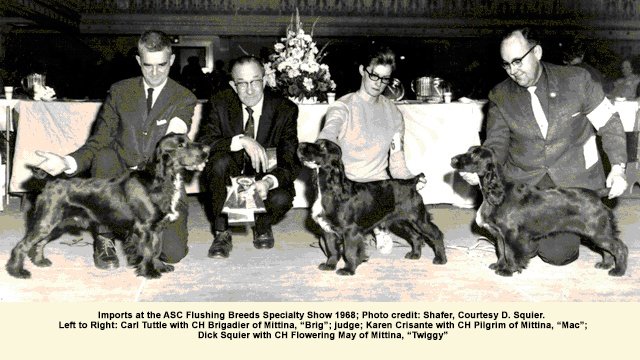 All of today’s Field Spaniels can be traced back in lineage to 4 dogs from the 50’s-60’s era: Elmbury Morwenna of Rhiwlas (liver bitch in the photo below,) Columbina of Teffont (black bitch,) Ronayne Regal and Gormac Teal, (black dog littermates.) This foundation stock produced 2 famous litters (the A and the J), both credited to Mrs. A. M. Jones MBE of “Mittina” prefix in England. Partial credit for retention of hunting ability is given to an Interbred registered outcross to a successful field dog, the tri-color English Springer Spaniel British Ch Whaddon Chase Duke, which was a few generations behind the famous Mittina litters.

We can all be grateful to that handful of breeders who salvaged the breed throughout the 1900’s. Without them we wouldn’t have these wonderful dogs that we have today! The breed’s popularity picked up as the 20th century advanced, and the Field Spaniel Society of America was formed to promote and protect the breed and became the AKC’s parent club for the breed in 1978. Today, the breed is increasingly gaining recognition as a handsome and versatile dog of sound health, good disposition, willing temperament, with good hunting drive and scenting ability, and as we embark into the 21st century, Field Spaniels are especially prized as favorites in the home, where they are well-loved, great family companions.