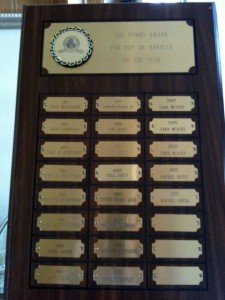 Offered for the Top Junior Handler handling a Field Spaniel in Junior Showmanship.The “Tommy” trophy was donated by Calico Field Spaniels, in memory of the consummate juniors dog, “Tommy,” CH Calico’s Pinball Wizard UD, who was loved and shown by Jesse Wolkenheim. The display walnut plaque, engraved each year with the winning junior’s name, is offered for the Junior Handler defeating the most juniors when earning Best Junior Handler or when placing in a Junior Showmanship class at a given show handling a Field Spaniel as published in AKC Awards for calendar year of January 1 through December 31. The Junior Handler need not be a member of FSSA.Commemorative plaques are awarded to trophy winners. Winners (beginning with 2017) of the Tommy Trophy are listed below.