The Field Spaniel Society of America health survey was conducted from November 2002 through March 2003. The raw data from the FSSA health survey was compiled at the University of Missouri which allowed complete anonymity. Assurance of anonymity probably contributed to the wonderful response. Raw data has been returned to us as Excel™ spreadsheets through which the data may be manipulated and looked at in various ways. Manipulation of the data will take some time, so there will be several reports in upcoming newsletters before the entire set of data is statistically compiled in a meaningful way.

Where did the data come from?

Most respondents were from the US, but there were also some from Canada, the UK, Australia, Sweden, and other countries not identified. A few forms were sent as an e-mail attachment so there was no indication as to country of origin on an envelope. 184 people completed some part of the survey on 446 individual Field Spaniels. Of those Field Spaniels, 225 were female, 216 were male and sex was not listed on 5 forms. There were 260 intact Field Spaniels with 186 spayed or neutered. While data was returned on 446 individual Field Spaniels, not all data was complete for all areas of the survey. This means that you will see variability in the total numbers as tabulations proceed.

What was the general profile of the dogs represented?

The tables below show a variety of responses on gender, origin, and color of the Fields Spaniels included in the survey. Percentages are detailed using standard rounding procedures which accounts for the imperfect match of 100% where there were small numbers to tabulate.

How long do Field Spaniels live?

An overall profile of longevity was the among the first questions to answer using survey data.
Initially, dogs profiled were divided into “Deceased” and “Living” as large categories. From there data was broken down further. There were a total of 437 usable responses for these large categories.

A total of 71 usable responses (16.2% of total 437 usable responses for the broad categories of deceased versus living), of which 32 were female (45% of total deceased dogs reported) and 49 were male (55% of total deceased dogs reported). Some data was not usable due to inaccurate reporting of birth versus death dates where the birth and/or death date was in the future or one was missing. Statistical analysis shows the average age of death among the 71 reported deceased Field Spaniels was 8.2 years. When corrected to eliminate deaths that could be considered accidental and deaths as a result of birth defect, the average age of death is 8.6 years. The table, below, details the reported causes of death for these 71 Field Spaniels. 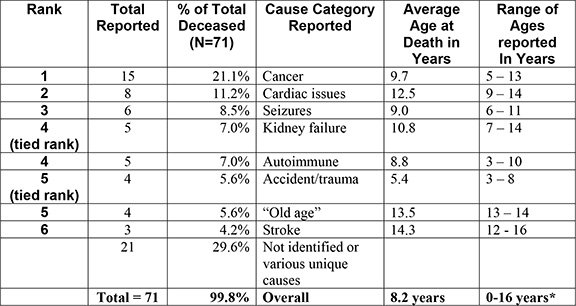 *0 = FS deceased due to birth defects or other causes under one year of age.

A total of 366 usable responses (83.8% of total 437 usable responses for the broad categories of deceased versus living), of which 192 were female (52% of total living dogs reported) and 174 were male (48% of total living dogs reported). This breakdown indicates that the living Field Spaniels reported are approximately the same gender percentage as the deceased Field Spaniels. As for the deceased Field Spaniel category, some data was not usable due to inaccurate reporting of birth dates where the birth date was in the future or was missing. Statistical analysis shows the average age of among the living 366 Field Spaniels is 5.2 years. The table, below, details these 366 living Field Spaniels. 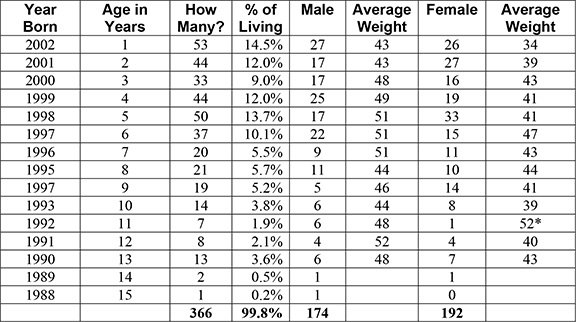 Where weights were reported in kilograms (Kg), the standard 2.2 pounds = 1 Kg conversion factor was utilized.
*One outlier reported a weight of 70 pounds in this category.

* This category was made up mainly of Field Spaniels under one year of age.

Most respondents completed the page with general care questions. The first question on the general care page was listing the 3 main health problems in Field Spaniels as perceived by the respondent. Because this was an open-ended question, there was a wide variety of responses. However some concerns were noted by a large number of Field owners.

The priorities listed by owners on the general care page may or may not correlate with the actual number of diagnosis listed in the individual dog pages. Information on specific diagnoses made in the Field Spaniel breed will be included in an upcoming report.

General Care Given to Field Spaniels As Identified By Respondents

Use of Heartworm Preventative

The Field Spaniel Society of America health survey was conducted from November 2002 through March 2003. The raw data from the FSSA health survey was compiled at the University of Missouri, which allowed complete anonymity. Assurance of anonymity probably contributed to the wonderful response. Raw data has been returned to us as Excel™ spreadsheets through which the data may be manipulated and looked at in various ways. Manipulation of the data will take some time, so there will be several reports in upcoming newsletters before the entire set of data is statistically compiled in a meaningful way. The first report was issued previously in the Winter 2003 Field Spaniel newsletter, beginning on page 35.

A total of 120 litters were reported by respondents, covering years from 1987 through 2003. Thirteen (13) of these had data that was unusable, leaving 107 litters reported upon with usable data. Problems in data reporting included inaccuracies such as “Total Live Births” being a number less than the reported “Total Weaned”. As there was no remedy to correct this data, the data was discarded. Causes of these issues could be misunderstanding of the question by respondents or inaccurate inputting of data into the Excel™ spreadsheet format, or a combination of both.

The following provides details of the results of data analysis:

The Field Spaniel Society of America health survey was conducted from November 2002 through March 2003. The raw data from the FSSA health survey was compiled at the University of Missouri, which allowed complete anonymity. Assurance of anonymity probably contributed to the wonderful response. Raw data was returned as Excel™ spreadsheets through which the data was manipulated and looked at in various ways.

Profound thanks goes to all Field Spaniel owners who responded to the survey. It required time and effort, and sometimes heartache as well, but the healthy future of our Field Spaniels counts on you. The following chart is a summary of the compiled data that resulted from the specific disease state portion of the survey. 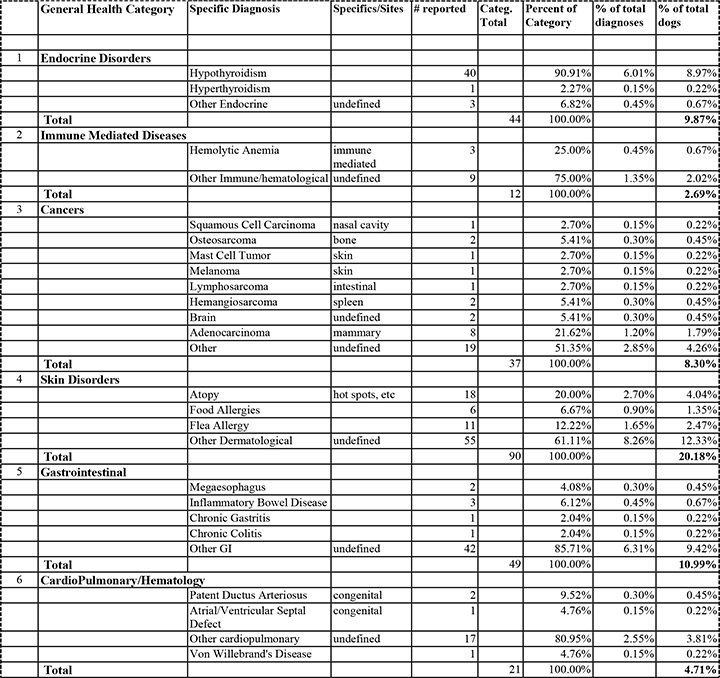 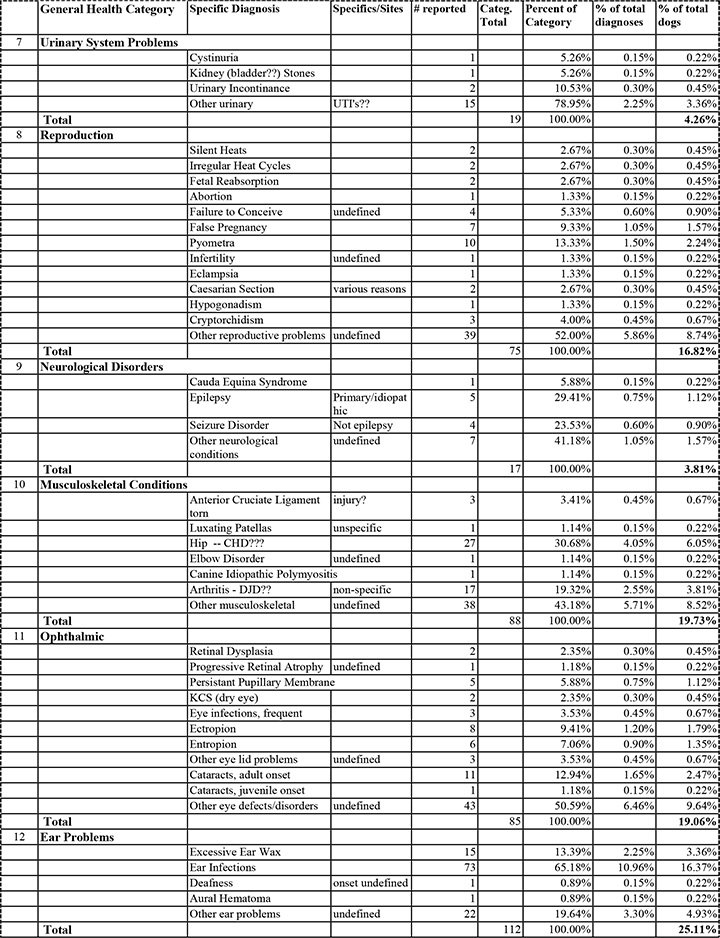 What conclusions can be reached?

First, and perhaps the most heartening is that many owners and breeders will cooperate in sharing information about their dogs’ health issues. Did everyone respond? Of course not: 184 individuals sent back the medical data forms on 446 individual Field Spaniels. But the response was infinitely larger than the preceding survey conducted nearly a decade earlier, which resulted in data reported for about a dozen Field Spaniels. The dog owning public is more and more aware that certain diseases can be screened for prior to breeding and many want proof of such screening prior to purchase. Breeders in greater numbers are letting down the barricade of fear about open dialogue. Our breed has an incredibly small gene pool, and all of our dogs are equally likely to carry similar recessive genes. Progress in identifying these problems will accelerate as a larger portion of dogs are included in the database.

Second, we can see certain VERY general trends. Ear problems, for example, account for 25% of recorded conditions. While frustrating and of concern, it is the general nature of drooping, hairy spaniel ears to be prone to problems. Thus, it is heartening to know that 25% of the conditions are in the category of non-life threatening, treatable, and unlikely to be greatly improved by genetic testing.

Third, while other categories seem to be large, as Reproduction, Musculoskeletal, and Endocrine, until we can compare these to other breeds, we don’t know if our Field Spaniels are in front of or behind the curve.   And since this is our first survey resulting in significant response, it is impossible to know the direction these totals are taking - in other words, are the problems getting better or worse. Of course, regardless that a condition is less a problem than in other breeds, we all want to continue to reduce incidence!

Fourth, the biggest stumbling blocks to clear conclusions is the huge “Other” listing in most of the categories. As these were likely used when participants didn’t know the specific medical diagnosis, it unfortunately confounds deductions.   As an example, look at the results for Cardiopulmonary. The results show 4.26% of total reported conditions are cardiopulmonary; yet a whopping 81% of those conditions are undefined. If those in that 81% group were mainly old age, degenerative or infectious conditions such as Congestive Heart Failure or AV Valvular Insufficiency due to streptococcal infection, then cardiopulmonary genetic testing would probably not lower incidence. On the other hand, should they turn out to be Sub-aortic Stenosis, Tetralogy of Fallot, collapsing trachea or other genetically-based heart/lung conditions, then a strong push for pre-breeding cardiac evaluations would be likely to reduce incidence providing breeders act upon the results of those evaluations.

The big conclusion is that those of us that love Field Spaniels have just learned enough to realize we need to know a lot more. But we can see where we need to improve and focus in future surveys. The entire discipline of DNA identification and genetic testing is expanding with amazing speed. The modern puppy buying public as well as concerned breeders want to be a part of this new technology for creating and owning healthier dogs. We can design better surveys and do improved data evaluation. We can get better ideas from other rare breeds.   But the breed needs more of its fanciers to participate. A firm and unwavering commitment from the FSSA to support identification, reporting and testing for genetic disorders would help bring more folks along.   As one of the rarer breeds with a narrow gene pool, we are much more capable of making genetic progress with these methods. The FSSA board, health committee, and membership should make a pledge today to further health progress through knowledge.   Then tomorrow we can be proud of our part in creating healthier dogs as well as establishing the Field Spaniel as a leading example for other breeds to follow.

Thank you to Bonnie Wilcox DVM for her review and write-up of this data.